Repercussion Theatre’s Shakespeare in the Park, which is on until August 8, is switching things up this season, with the titular characters of Romeo & Juliet both being played by women. Michelle Rambharose as Juliet and Shauna Thompson as a female Romeo flavour their love with all the angst and eagerness of their teenage characters, though their chemistry unfortunately runs thin. Romeo’s folks, the Montagues, are a same-sex couple. Juliet’s parents, the Capulets, switch genders. It works when the performers project their emotions with sincerity, as does the brilliant Nadia Verrucci as the male Capulet. She gives a heartfelt performance, but her stage spouse, Anton May in drag as Lady Capulet, flounces and exaggerates his gestures to the point of eclipsing the character’s concern and grief. In contrast, Adam Capriolo finds success in his overtly gay characterization of Mercutio, giving the character wit and flamboyance without sacrificing his deep feelings of faithful friendship to Romeo. Capriolo doubles as the Prince with a commanding royal aura. The two other stars of the production are Gitanjali Jain as the garrulous Nurse and Ray Jacildo, whose portrayal of Paris exudes more passion than Thompson’s Romeo. Also keeping things on an even keel is Cara Krisman, who portrays Benvolio, a traditionally male role, with warmth and spirit. Ryan Bommarito, who plays the frazzled but heroic Friar John, also delightfully doubles in minor comedic roles. Sophie El-Assaad blurs the characters’ genders with her stylish costumes and proves director Amanda Kellock’s contention that the point of the play is universal. 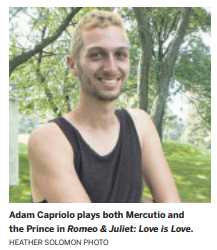 Actor Capriolo, who spoke of his experience before opening night, believes that the gender bending gives audiences understanding. “Since we’re doing a queer rendition of Romeo & Juliet, with two women at the centre, it was important to the cast and to Amanda to make sure that queerness is just a part of the play,” he says. “My Mercutio represents the confident queer person in Romeo’s life, a celebration of being gay, of love of life, not a focus on the struggle, but a focus on the joy of being a part of that community.” That’s the essence of the play as a whole, which is subtitled “Love is Love,” a phrase that marked the moving Tony Award acceptance speech by Hamilton’s Lin-Manuel Miranda. Love warms the veins of this drama and to Kellock’s credit, one ceases to think of it as gay love or heterosexual love, but simply as love as an emotion that drives humanity to heights, as well as depths.

Ana Cappelluto’s set, a collection of stacked “stone” blocks and geometric shapes, doubles as a reminder of mortality. As the sun wanes during the play, backlit portrait panels of people’s faces materialize within the stelae, including tombstones that feature photos of the deceased (the ancestors were provided by the cast and crew). “It ties into Amanda’s vision of it being a timeless story of feuding families, whether it be the Capulets and the Montagues, the Democrats and Republicans or Israel’s situation. It’s something we c

an all understand and have a personal connection to,” says Capriolo. This is his second stint with Repercussion Theatre. He is often remembered for his major role in the Persephone Theatre’s production of Spring Awakening and can now be followed as a member of the cast of the TV show, The Bold Type. Capriolo is currently writing his own screenplay. It’s a long way from his elementary school days at Akiva. One can easily pick out the 6-3 actor before he utters the words that open Romeo & Juliet: Love is Love. For a list of parks where the play will be staged – including CôteSaint-Luc’s Pierre Elliott Trudeau Park, where it is being performed on Aug. 2 – go to repercussiontheatre.com.