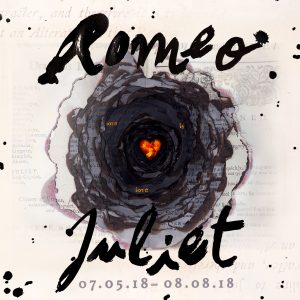 For its 30th anniversary season, Repercussion Theatre presents Romeo & Juliet: Love is Love from July 5th to August 8th, 2018. The largest Shakespeare-in-the-Park (SITP) tour that Repercussion Theatre has had in a decade-with 30 shows to mark the anniversary-makes the usual rounds of local parks as well as visits to the West Island, the Eastern Townships, the Laurentians, Eastern Ontario and Quebec’s Montérégie with two additional locations: the Olympic Park and Hawkesbury. The Montreal opening is July 6th at Mount Royal Cemetery; the West Island opening is July 5th at Baie d’Urfé’s Fritz Farm, and the Ontario opening is in Cornwall on July 7th at the appropriately named Lamoureux Park. All shows begin at 7pm.

ROMEO: What’s in a name, that which we call a rose by any other word would smell as sweet

Repercussion’s customary method of “holding a mirror up to nature” creates a unique, current context through which the well-known love tragedy unfolds. A band of thespians is tasked to perform Romeo and Juliet repeatedly until society finally learns that hate not only destroys the subjects of its loathing but also the cherished. The troupe draw lots to decide who plays which roles and as luck would have it this time, Romeo and Juliet will be portrayed by women, among other chance gender-bent character assignations. Timeless themes of rebellion, power, pride, fate, and the passionate and unpredictable nature of love and hate, resonate anew in this 400-year old tale. Juliet’s arranged marriage, built on the business of making powerful alliances through wedlock, and the Friar’s ill-fated letter that could have saved the doomed lovers, ultimately force them to take the most drastic of measures in the name of love.

“I don’t think we’re doing anything particularly new”, explains Ms. Kellock. “While Shakespeare has come to be regarded as an untouchable monolith, he himself was not rigid. He was like a Renaissance sci-fi playwright, taking old stories, setting them in far-off, half-imagined places, and applying his contemporary lens to connect with the audiences of his time. This play in particular has often had a ‘queer’ element to it, whether it was the Elizabethan custom of men portraying all of the female roles or the Cushman sisters in the 1800s, who took the world by storm with their interpretation of the play. It’s been such a joy to explore the various ways that identity and desire are experienced and expressed in our production.” Ultimately, it is not sexual identity that forces the star-crossed lovers to hide their passion but the endless rivalry between the families that inhibits them from proclaiming their love publicly. Kellock asks, “Wouldn’t it be great if the play finally taught us to let people love who they want to love”?

ROMEO: O sweet Juliet, thy beauty hath made me effeminate

Subtle costuming by returning META-winning designer, Sophie El-Assad (Much Ado About Nothing, SITP 2017), differentiates the rigid power establishment from the younger generation trying to break free of their elders’ gender-defining finery, and clearly contrasts the ‘old money’ Montagues with the flashier Bourgeois Capulets. Internationally renowned set and lighting designer, Ana Cappelluto, a descendant of the Capulet clan, used childhood memories of growing up in Italy to inspire the adaptable set and evocative lighting, which reflect both the calcified hatred between the “two households” and the sensual duality of love and death. Gitanjali Jain does double duty as a performer and the Sound Designer, using the Cajon, a South American percussion instrument, and the actors’ voices to create the original sound scape, and inserts some traditional songs, though none are inherent to the play. Repercussion’s new Artistic Associate, Shanti Gonzales, is the Assistant Director; Holly Greco created the dances; the exciting scuffles and brawls are devised by fight choreographer, Michelle Lewis; and renowned Shakespeare coach, Brian Doubt, returns for the third year to provide text support. Visual artist and film director, Sarah Junique, is the Production Manager and Danielle Laurin adds a third SITP production to her credits as Stage Manager for the second time.

Pocket Shakespeare: For the third consecutive year, everyone will be able to enjoy every nuance of the Bard’s English thanks to Plank Design, who designed a unique application that enables Francophone audiences to follow the text by reading French sub-titles on their smart phones.

SHAKESPEARE-BEFORE-THE-SHOW: Once again, Repercussion Theatre is partnering with Geordie Productions to give young audiences playful and innovative ways to engage with Shakespeare. There are six 2-hour “Introduction to Shakespeare” workshops available for kids and teens at a cost of $35. Participants will learn what all the “foresooths” and “wherefores” are about, experience the fun of speaking Shakespeare, and meet the cast of Romeo & Juliet: Love is Love. Maximum 10 children per class. Visit http://geordie.ca/gtsworkshops to register.