It might be easy to imagine a company looking back on the occasion of their thirtieth, but Repercussion, while acknowledging and celebrating their three decades of history, are forging forward. Living up to their mandate to “hold a mirror up to nature”, this season promises theatre-goers timely and fresh experiences – Shakespeare has done anew with a mixture of “you know, it makes a lot of sense to look at it that way” and “oooh, that’s really cool”. 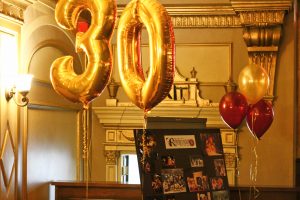 From the first, walking into the gorgeously appointed Rialto on launch night, the sense that this was going to be an evening of Theatre was immediately clear. The walls were festooned with posters of successful tours, and hefty albums filled with photos of memorable performances, given before generations of fans, were set up, inviting happy reminiscences. As attendees perused showcased archival items and discussed their excitement about the company’s upcoming production of Romeo and Juliet, the crowd itself mirrored Repercussion’s mix of the established and the up-and-coming. The room buzzed with chatter from folk who had been invited to note their affiliation with Repercussion on the name tags they sported – the group included members of this season’s cast, past alumni, board members, community VIPs, supporters, theatre lovers… a meaningful feeling of vibrant community, new and old, suffused the room.

As Artistic Director Amanda Kellock took to the stage and officially announced this season’s projects – spanning an ambitious thirty-stop tour and the commissioning of two brand-new plays speaking to the relevance and impact of Shakespeare – she joked that the company has a heritage that might be older than some of its current touring members. Looking around the room, the mingling of fans, supporters, partners, and colleagues from the broadest of spectrums, cemented the notion that Repercussion is an institution – a critical thread running through the tapestry of this city’s theatre history.

Compellingly, Repercussion emphasizes the exchange between veterans and neophytes; sharing the floor, the stage, and a love for theatre has kept the company dynamic. At one point, as we listened, dreaming of a summer that feels too far off, a photo of Repercussion’s inaugural touring cast was projected on stage – people were able to name, to list, members of that troupe from a thirty-year-old snapshot, speaking to the depth of Repercussion’s impact.

Launching into its thirtieth year, Repercussion is keeping things new, bursting with energy that makes it clear that Shakespeare-in-the-Park is still a spry, fair youth.